Food For Thought #1: The Frankensteinification of Grains (Part 1)

Origins of the Food Pyramid

The concept of the Food Pyramid was introduced by Sweden in 1974. Sweden’s National Board of Health and Welfare created this diagram of “basic foods” that were both cheap and nutrient rich, as well as supplements that would provide added nutrients not found in specific food groups. America’s United States Department of Agriculture adopted this concept, and published the first food pyramid in 1992. Now, the purpose of the American food pyramid model is to indicate the quantity and quality that should be consumed for each of the 6 food groups. Every five years the food pyramid is updated to the current findings of nutritional research. Although this does create some inconsistency of what one should actually consume, the food groups have remained fundamentally the same, and the quantities have not varied all that significantly. 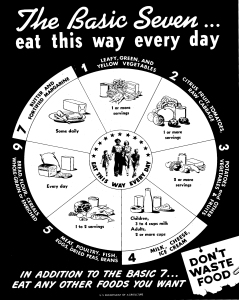 The first food Pyramid, created by Sweden in 1974. The concept would soon be adopted by America in 1992.

However, one of the dilemmas that may reside in the food pyramid is not in its continual modification, but in its fundamental constituents’. At the base of the food pyramid is a food group known as grains, which consist of any food composed of wheat, rye, cornmeal, barley, oat or any other grain product. The grain food group proudly boasts the most servings one should consume, ranging from 6-8 servings per day. However, research dating all the way back to pre-agricultural times has shown that large consumptions of certain grains, primarily wheat based products result in a multitude of health issues. The manipulation and consumption of grain to fit the standards of modern urban agriculture has been linked to tooth decay and malformations, over 200 autoimmune responses in the body, addictive and withdrawal responses that mimic opiates, and an array of allergic reactions.

Lets begin in the pre-agricultural days of man. It is thought that the cultivation of grain is heavily responsible for the continual survival of mankind. Grains ability and willingness to mate rather rapidly with other forms of grain made in a formidable foe in the face of famine, it allowed man to cultivate harsh environments and enjoy a life of comfort granted by a cornucopia of food. However, its abundant nature did not come without its own shortcomings. Dr. William Davis, a cardiologist and author of the book “Wheat Belly” examines the relationship between the introduction of Grain and the subsequent health issues that stemmed from it. Dr. Davis notes that, “tooth decay was uncommon in the Pre-Neolithic (before agriculture) period”. Even without the accessibility to modern day fluoride, toothpaste, dental floss, and dentists these earlier civilizations did not exhibit tooth related malformations and diseases; that is until the integration of grain into their diet. Otzi, a well-preserved Pre-Neolithic corpse of an adult male demonstrates some of the effects the integration of wild grains into Neolithic civilizations had on tooth decay and malformation.

In addition to its detrimental affect on tooth health, the introduction of grain in the Neolithic era led to an abundance of food. This abundance led to a decrease in physical activity and an increase in sedentary lifestyle. It is not at all surprising then that the Neolithic era marks the prevalence of many autoimmune diseases and health complications that still accompany modern urbanized agriculture. Examples of these health complications included, porotic hyperostosis (bone overgrowth), inflammatory diseases, arthritic lesions (Arthritis), musco-skeletal stress markers (increased short statures) and degenerative joint diseases (i.e. osteoarthritis).

The integration of wild grains into Neolithic period led to an array of health issues, however, the continue manipulation of grain has led to new strains drastically different than its ancestors. Grains are revered as one of the few modern day foods that are not genetically mortified (meaning it is not manipulated by gene splicing). Still, what the grain industries do not highlight are the other many invasive practices used on grain that are vastly more dangerous to our health than if they were simply genetically modified. Procedures such as repeated hybridization and mutagenesis have led to biochemically, and genetically different grains than the natural wild grains of our ancestors. Resulting in an even greater array of autoimmune responses than in the beginning of the Neolithic period.

The process of repeated hybridization (crossing of different strains of an organism to exhibit new characteristics in the offspring generation) results in the creation of new proteins in the successive generations of wheat. These new proteins are intended to display favorable characteristics such as higher yield and resistance to disease. To understand the implications of repeated hybridization imagine if the same process were conducted on mammalian species. This would result in animals that display a different phenotype and genotype than the parent animal. Overtime, the offspring would become distinctly different than its original source, creating some kind of mutant, freak like creature unrecognizable to our eyes. This same concept applies to the hybridization of wheat. Repeatedly inducing new proteins in wheat, results in our stomach’s inability to recognize these new strands of wheat. As with any foreign invader introduced to our body, the new strands trigger autoimmune responses. A research study conducted by Plant Research International provides evidence supporting these autoimmune responses triggered by these new hybridized strands of wheat. These varied strains of wheat contain varied strains of the Gluten protein, and this study links “Gluten proteins from wheat [that] induce celiac disease (CD) in genetically susceptible individuals. Specific gluten peptides [are also] presented by antigen cells to gluten-sensitive T-cell lymphocytes leading to CD”. The hybridization of wheat is linked to the development of celiac disease, as well as being major contributor to the increase of Cardiovascular Disease in America.